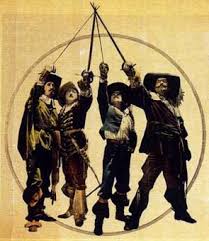 
While this makes sense to me, some points are weaker than others.  For instance, would a permeant welfare recipient be considered a freeloader? They get individual benefit without always putting much into the group, and they aren't criminalized like those who directly take things from others.  Or would they fall into the same category as little children or the aged: part of the group despite minimal immediate group contributions?

Norenzayan's inferred intent is to suggest that rule of law acts as a norm creator & enforcer.  This frees people up from relying on religion to create and enforce norms necessary for societal stability/emergence.

When I look back at history it appears that at some point hard and soft norms were distinguished: civil society tended to take over clear cut negative norms (you killed, you stole, etc) and religion tended to take over fuzzy negative norms (you weren't nice, etc.) and positive norms (be nice, virtuous, etc). Religion kept the moral 'Big Brother'.  However, in the last few decades people in many rule of law states either no longer require religion's moral Big Brother or no longer require religion.  Here are some possible reasons off the top of my head.
The evolutionary need for a Moral Big brother hasn't been established.  While it is certainly critical in religion and quasi-religion formation/sustenance, this doesn't mean it is an evolutionary proximate cause, nor an evolutionary tendency.  It certainly may be, but research has yet to reach this question.  (My suspicion is that given a normal distribution of people, we'd expect some to fall in case 1, some in case 2 and most in case 3.  However, I wouldn't be surprised if case 2 ended up as the mode rather than case 3).

My study of education as an adaptive moralized (sometimes even transcendental) group mean, at least for me, cases 2 and 3 are the most interesting.  In this vein, I wonder if the 'r' between atheism and education as a reform resistant institution would be similar to Norenzayan's 'r' between atheism and the rule of law? If so, Norenzayan's expectation of causation may be unfounded: education's role as a societal coherer, which manifests itself through adaptive level group characteristics such as reform resistance, may be what enables societal stability without religion.  If this is the case then a moral Big Brother may take second seat to institutionalized coherence creation.... Or it may not….
Posted by chris goble at 7:55 PM