The Alberta Teacher's Association is having its annual convention this weekend.  A post by the always insightful Phil McRae caught my eye 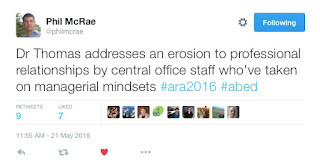 which ties in the union/profession's official comments,

with a bit more context by the union, 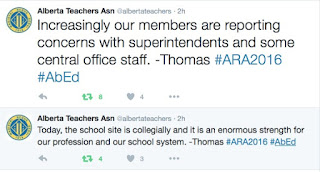 So what I'm going to do today is explain why these types of dynamics happen.  I'll do this from judgment aggregation theory (List & Pettit's formulation).   I'll then reference this back to Argyris' old theory-in-action work (which I'm sad never caught on as well as it would now - the theoretical support tools just weren't there when he wrote it).


JUDGMENT AGGREGATION
The basic tenet behind judgment aggregation theory is that individual judgments when aggregated on a multi-step issue can create paradoxical results.


Individuals may form a group agent in virtue of evolutionary selection or cleverly designed incentives to act as required for group agency, perhaps within independent cells.  here the individuals contribute to the group agent's performance, but do not explicitly authorize the group agent, the need not even be aware of its existence. (p. 36)

One of the challenges is how to make a Turing machine aggregator "rational".  They take a fairly generous approach here simply saying that the aggregate needs to :

They also add in the need for binary attitudes (but that is more to tie up details associated with a rigorous formal logical approach).

On a whole, this boils down to something like the Turing test.  The aggregator is rational if people ascribe intentionality to it.

While their work has tonnes of depth and fascinating detail,  I'll resist tangent-temptations and pull another quote.

The supervenient relation between the members' attitudes and actions and those of the group can be so complex that the group agent may sometimes think or do something that few, if any, members individually support.  And secondly, the supervenient of the group's attitudes and actions on those of its members is entirely consistent with some individuals being systematically overruled on issues that matter to them a lot.  Accordingly, the kind of control that individual members must be able to exercise in order to enjoy effective protection has to be stronger.  It is not enough for individuals to be able to contribute to what the group thinks or does on the issues that particularly matter to them.  They must be individually decisive on those issues.  Roughly speaking, we say that an individual is 'decisive' on a particular issue if he or she is able to determine fully -  and not merely in conjunction with other individuals - how this issue is to be settled. (p. 130)


This leads to a very interesting (and rigorously argued) conclusion: group agents 'control' individual actors via attitude biasing.  This is in stark contrast to usual definitions of control which assume the application or threat of application of formal power.  Here's another quote on this:


Since our definition of control has taken the group's attitudes, rather than its actions themselves, to be the targets of the individuals' control - the reason being that the group's actions are usually mediated by its attitudes - we can focus, once more on the part of the organizational structure that is easiest to model theoretically: its underlying aggregation function. (p. 136)

As mentioned the aggregation function is based in attitude biasing.  More specially it is a type of espoused, and complexly aggregated, morality.  Here are a few more quotes to take us to the end.


To be a person is to have the capacity to perform as a person.  An to perform as a person is to be party to a system of accepted conventions, such as a system of law, under which one contracts obligations to others... In particular it is to be a knowledgeable and competent party to such a system of obligations.  One knows what is owed to one, and what one owes to others, and one is able and willing to pay one's debts or to recognize that censure and sanction are reasonable in cases of failure... But non-persons cannot be moved by being made aware of obligations they owe to others. (p. 173)


To be sure, group agents are not flesh-and-blood persons.  They are pachydermic and inflexible in various ways, and lack the perceptions and emotions of human individuals.  But they nonetheless have the basic prerequisites of personhood.  Not only do they form and enact a single mind, displaying beliefs and acting on their basis.  They can speak for that mind in a way that enables them to function within the space of mutual recognized obligations. (p.176)

INSTITUTIONALIZED EDUCATION AS A GROUP AGENT
Viewing institutionalized education as a group agent is fairly easy.  Education operates on multiple organizational levels just as judgment aggregation and judgment aggregator agents do.  What we want to find out is how this informs the conflict coming to a head in some parts of the Alberta educational system?

THE CONFLICT
The conflict is largely between different philosophical approaches and the relative benefit of secondary feed-back effects on students, teachers, and the system itself.  The actors are:

JUDGEMENT PARALLELS
Judgment aggregation theory suggests the conflict might be framed as fight for different aggregation methods: do you aggregate down each premise or across the whole?  I suspect technocrats favour the premise based approach.  I suspect social scientists favour conclusion based aggregation.

However, this simplistic view isn't what is of interest (after all, how do you really falsify such sociology?).  Rather what's of real interest in what List & Pettit found in the process of judgment aggregation....

GROUP ACTOR CONTROL
Remember that List & Pettit found that the group agent exerted control by biasing the actions of actors and their judgment aggregation processes via a single (ill constrained) "morality" or "intentionality".  In simpler terms, what the "group" was seen as wanting tended to bias individual actors.

The conclusions are quite stark.


CONCLUSIONS
The conclusions suggest that institutionalized education is a behemoth.  Railing against it just burns up capital.  Nonetheless, the system as a whole moves as a net result of endless waves of such expenditures (see Tyack & Cuban's surface wave analogy to ed reform).  However any single level acting on its own is unlikely to be productive.  Rather, the degree of any level's variance to aggregrate intentionality correlates with the degree of pushback it is likely to get.

Incremental change is the purview of morally-infused organizations.  Radical change is not.

Radical change can, however, occur when one part of the system breaks off from the rest.  The result is between-group competition (or multi-level selection type 2 reproduction).

All-in-all, dust ups between unions and senior managers is never productive for students.  Nor is it productive for teachers as a whole, even though individual loci may show gains.  In education, thinking you're right may be noble.  Forcing other levels in the system to act on your nobility is... naive.