Public or Private: The Dynamics of Equity

Alberta is seeing a concerted PR push to legitimize de-funding private schools (i.e. pulling public funding from them).  The leading edge of this wedge issue is framed in terms of high-end private schools with large budget surpluses. 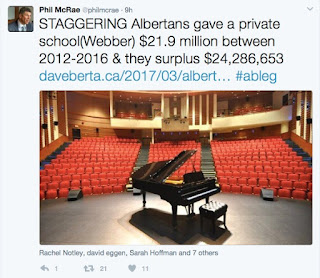 However, it appears charter schools of most any strip are also in the net.  A publicized google map overlay shows each charter/private school's public funding allotment.

These values (usually between 1-10 million) are not presented in context.  I doubt average people realize how expensive schools actually are (~8-10k per student meaning 1-2 million even for a relatively small school).  These expenditures are similar to public schools of the same size (private schools are funded at 70%, I'm not sure about charter school funding...).

A second nefarious link is Edmonton public's comments about exploring the creation of Catholic magnet schools.  Conspiracy theorists (or those who know the animosity between some of the parties) have no trouble seeing this as an exploratory step in the possible revocation of Alberta's constitutional provision for separate Catholic schools.

I have little opinion on the merits or demerits of any of these moves.  I'm comfortably ambivalent with respect to this class of politics.

However, the group dynamics raised by such moves are pretty clear.

Education as Outcome vs. Input 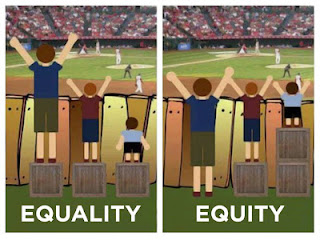 The first match this lights next to the proverbial hay-pile is an assurance that societal coherers, like education, are equitable (in the classic equality sense of the word); they make no distinction about the individual.  Religious-like shifts to progressive equity counter simplistic classical equality: Progressivism posits that there should be equity and everyone should get what they need (ensuring of course that there is a nice high minimum).

Education is obviously shifting this way.  This is demonstrated by the

Obviously as the Western implosion of identity politics has shown, equity, while good in theory can have some major consequences on a society's cohesiveness.  Equity can enable some rather nasty blow back.  One classic theoretical paper here is Sigmund & Nowak's Tides of Tolerance: ever-increasing levels of tolerance are followed by short intolerance phase changes which reset tolerance levels.  Basically, too much tolerance sews the seeds of internal collapse. The pattern is cyclical.  Cliodynamics supports such general trends, albeit with different causal assumptions.

Alberta's desired shift to an equity (outcome) rather than an equality (input) approach to education may certainly reflect progressive mores.  Alberta's potential equity move is designed to shift funds around in order to help areas of need: "Imagine what XX million dollars for those rich kids could do for these poor underperforming kids".  There is no question that the intention is noble.  But the implications, as with many religiously influenced moral decisions, aren't necessarily as well thought out as one imagines.  Ex post facto judgment rationalization is strongly significant in moral landscapes.  Ideological homogeneity can also be a factor.  I have no idea to which this may or may not be present in Alberta's Education system, nor whether it has any effect, but ideological diversity may mirror a typical humanity department, making confrontation with counter-points less likely.

But what are the logical consequences of moving to an outcome rather than input funding model?  Perhaps eventually low performing schools will get additional funding.  Good right?  Probably.  But it is inevitable that some principals may choose to game the system for lower results.  After all, access to common pool goods are at stake. Should I as a principal game results to look better for my own advancement, or game results to get more funds, surfacing appearances for real betterment of the kids (say a music program).  The depth and breadth to which this might occur of course depends upon the tension between central office's push for better achievement vs the localized benefits of additional funds.  But, perhaps such tensions can be moderated and structurally controlled.  I don't see this as much of a factor until the new system becomes mature.

What does matter is social coherence.  An output rather than input model conveys the sense that "identity" matters.  While theoretically reasonable, in practice this is extremely corrosive to societies. The social psychology literature here is very well documented.  Creation of identifiable sub-groups decreases social cohesion. Groups solidify on even the most asininely-pointless demarkers.  They then potentially resonate higher and higher levels of within-group cohesion (depending upon the environmental landscape and feedback effects).  In many cases this is followed by out-group animosity.  Steep in-group-out-group gradients re-enforce triableness and create lines which have increasingly high migration costs.

An equity based approach to educational resourcing can have significant deciphering effects if over-extended or changed too rapidly.

Shadow Systems & Between Group Competition
Because education is such an adaptive group, it is very sensitive to fitness-changing signals.  This includes norm compliance, usurpation, freeloading, changes in freeloader percentages, and costly commitment displays.

Pulling public funding from identifiable groups raises adaptive-group alarm bells.  People can't help but think, "why are we/they targeted"?  "What norms were broken"?  "What are the new norms"?  Responses like, "its nothing personal, you just don't need the money", don't fly.  Everyone knows wealthy elite may not need public funds, but our evolved tendencies are based on practical not factual reality.

In the evolutionary landscape, the costs of false negatives are generally very high. The cost of false positives are generally low. With respect to fitness, it pays for the group to be conservative, sending out occasional liberal probes to explore, maintain connection with, and influence its dynamic environment. Without group oriented conservativeness, actors group-oriented self-sacrifice has a good chance of being anti-fit.  Sticking in group which is not sensitive to false positives is like sinking money into a pit you can never see until it is too late. Because humans exist in the tension between fitness enhancing groups and fitness decreasing groups, we tend to be fairly sensitive and fairly mobile in this regard.  If walking away has little cost, people do it.  If another option is available, people will take it.

Rather than private (and potentially charter) schools sucking up the funding slap to the face, another option is for them to screw Alberta curriculum and control and develop their own shadow system.  For instance, if I was a superintendent in such a situation, I might look for some partner schools, assess what Universities are really after for entrance standards and choose to meet those any way I can - say ACT tests, self-generated tests, and perhaps select Alberta diploma exams.  That might let me ignore courses which might not have much utility for my demographic (CALM, 100credit requirements, etc.)  University admission departments are surprisingly aware of how students from one school perform in post-secondary programs in relation to those from another school.  For instance, my father's admissions team was acutely aware of how physics scores from scores of provincial high schools normalized against each other.

So a shadow system is very possible.  Home Schooling attest to this.  But is it likely?


The Accreditation Hammer
Education's most adaptive benefit is accreditation.  This is what gets people jobs.  Eschewing this is no simple matter.  Home Schooling has had to fight lots of battles in this regard.  Its success waxes and wanes generationally.  Despite what futurists might hope, outcome based skill assessment is not a path many HR departments are eager to pursue in relation to new hires.  It is risky (structurally and individually).

Can private school shadow systems get around accreditation?  Perhaps.  They could pursue high school diplomas from other provinces, states or countries.  Perhaps an international baccalaureate diploma has the right cache and acceptance levels? This just leaves provincial requirements for teacher accreditation as the final straw.

Unions have a powerful hammer here.  But, the vagaries of politics are fickle.  Could anti-union ministers from a non-friendly political party use this as a wedge against Union control?  What is good for the goose is good for the gander.  Changes to social contracts (within group norms) makes all sorts of things possible.  Are private school teachers not instructing Alberta curriculum really required to be accredited by an Alberta professional body?  Why couldn't they be accredited by the international baccalaureate body?  What a blow to a Teacher's Union.  What a self-destructive "race-to-the-bottom".

The introduction of between group competition is never friendly and rarely goes as planned.  This is exceptionally true when moral norms are broken.  It is doubly true when large social landscapes are in the midst of a Great Moral Awakening (destabilization) such as that which the West is currently experiencing.


Falsification & Anticipated Counter-Arguments
The biggest problem with any of this reasoning is falsification.  The weakness of Bandura's social-exchange theory with respect to forward prediction comes to mind.  Sociology is good at exploring possibilities, but quite horrible at falsification and unbiased thinking.

The adaptive group approach I've taken depends upon the degree to which education functions an adaptive group.  Just because adaptive groups are sensitive to faith-breaches and freeloading changes doesn't mean education is.  For instance, transactional business are rather insensitive to such things.  Capitalism, is in fact, optimized for such an environment.

Things which suggest education functions as an adaptive group include:

Education achievement has been shown to have a number possible genetic loci.  Orientation toward education is likely to have a genetic (as well as cultural) component.  This supports arguments for education as an adaptive group and counters arguments against this position.  Additionally, education is, over the long term, fitness enhancing both at the individual and group level (studies do suggest higher levels of education are correlated with fewer kids.  However, these studies don't account for what occurs during major societal upheavals like war and famine.  They also don't account for the very significant effects of rare individuals with exceptionally high fitness - the celebrity procreative effect.  The fitness case is not settled science.)


Conclusion
If education does indeed function as an adaptive group, then actions which challenge existing norms /social contracts and signal potential in-group out-group changes are very likely to induce the expression of non-rational group dynamics.  This includes pushback against potential usurpers and freeloaders.  It also includes the possibility of spinning off competing shadow systems. As per basic group-evolution theory, spinoffs will likely freeload as much as possible until called out, while still functioning as a distinct group following distinct norms.

The formation of a competing shadow system will challenge power structures, resulting in each side doubling down.  Provincially I'd expect teacher accreditation to be the first issue (following student accreditation).  The second issue I'd expect is back-door pressure on Universities to blacklist specific non-approved educational paths.  The third issue I'd expect is heavy handed legal requirements that all Alberta students have a "particular" type of educational experience or face the risk of attendance boards and embarrassing Social Services audits (for not providing a governmentally acceptable education).

What's the Point of Moral Outrage

The Psychology of Moral Conviction

More from me on Sacred Values in Education