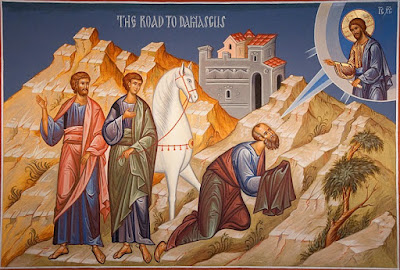 Religion has a variety of conversion terms.  Christian sects differ in what it is the person is actually accepting.  Catholics often accept a conglomeration of original sin, saving grace and submission to authority.  Evangelicals' born again experience mainly centres around acceptance of one's sinful state and faith in saving grace.  Mormon testimonies involve a spiritual experience that combines grace with acceptance of modern authority and revelation (Book of Mormon, Joseph Smith as a prophet).  Islam's seems related to acceptance of a strong positivism which includes Mohamed's divine role and the Koran.

Lately, the quasi-religious nature of secular moralized-politics have reproduced the same dynamics.  Its "red pill" vs. "privilege".  While communities haven't fully ritualized these experiences, the process is certainly underway.  How will the stack up? 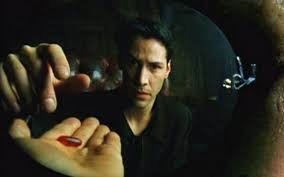 The alt-light's conversion experience is often called "taking the red pill". If you don't get the reference, watch The Matrix.

The Red Pill meme was popularized within the men's right movement. Generalized usage has expanded in the last 6 months.  This seems to coincide with liberal backlash against free speech restrictions and far left violence.  Thus, it coincides with liberalism's ongoing schism between radical socialism and classical libertarianism.  The fake news media meme has energized this situation.  After all, it doesn't take much first hand experience with main stream media to realize how inaccurate and self-righteously biased things are. Such realizations are increasingly branded as "a road to Damascus moment".

Such an "aha" moment seems to center around a coming of age with respect to informational independence.  In Fowler's old stages of faith theory, it probably sits at a level 4: disillusionment.  Information can't be trusted.  It seems to be almost immediately followed by a belief that the individual themselves must always be the final arbiter of "truth". Thus it promotes itself as a type of radical individualism.  Although in practice, most people's independence can be confused with naive acquiesce to classical libertarian group-thought.

My sense is that this most closely parallels mormonism "coming of age" ritualistic testimony experience.  It is biased for a radical type of individualism but is operationalized by highly groupish dynamics.  Mormonism's "testimony' conversion is, among Western religions, probably the least biased by an acceptance of original sin.  It is, instead, more biased towards an admittance of one's own personal faults.  Even then, the admittance of sin is often separated into an often distinct "born again" experience.

Red Piller's conversion seems to amount to an acceptance of their naivete and lack of independent discernment and lack of self-empowerment. Cassie Jayne's popular Red Pill documentary on Men's Rights is probably a good concise example too the phenomenon that avoids the misogynist vitriol associated with other popular portrayals. 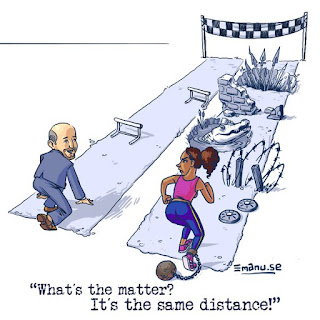 Red Pilling is obviously different from privilege confessions: the radical left's focus on original sin or white guilt (which is more generalized as intersectional guilt).  As far as I can see, this dynamically parallel ritualistic experience centres around a personal and collective admission of guilt.  To my way of thinking this closely mirrors many elements of  Catholicism.

The privilege confession experience typically brings with it a strong appeal-to-authority dynamic.  There are professors and civil right's advocates who are well versed in the theories and skills needed to "detoxify" and limit other's "oppression".  Indeed, most of the theology of post modern "studies" departments centres around a systemic approach to this issue.  This creates a further parallel to Catholicism's own radical systemic theology.  This is in stark contrast to protestantism's individualism.  However, authority need not be limited to formal academic channels.  Stronger intersectional variations of this ritual involve accepting the de facto authority of any marginalized individual over one's self.  Often this is called "checking your privilege".  It is pejoratively referred to as "the oppression olympics".

WHICH WILL WIN OUT?
It would be very interesting to see what current cultural evolution tools have to say about these competing culturgens.  Unfortunately that will have to wait.  Instead, some quick speculations about proselytization will have to suffice.  But, before I start, I had better confess my bias toward individualism... :)

Proselytizing
I suspect "red pilling" is a good fit for America's protestant tradition with radical individualism.  You don't have to sell people on a single idea (confess your guilt, admit your power, bend your knee), you just have to ask them to think for themselves and investigate. Perhaps this explains some of Mormonism's higher conversion rate that Jehovah's Witnesses.  The former asks people to investigate and then ask God what is right.  The latter asks people to investigate from the scriptures what is most logical.  This strategy is much more of an appeal to an-authority approach.

Thus, I give "red pilling" a leg up on "privilege".  While there are certainly many people who prefer the certainty of authority or the self-flagellation of confession, I suspect the "find out for yourself" approach is easier to sell to non-extremists.

Logical Structure
Privilege has a leg up on pseudo-scientific logic.  Because it has a well developed academic base and is currently optimized for a systemic theological world-view, it portrays a stronger sense of relative validity.  Red pilling is much like mormonism, you're simply asked to believe (or more accurately, disbelieve). The process is anything but linear and logically-structured.  Americans tend to reject over-structured social processes more than Europeans who seem to appreciate it.

The systematized nature of privilege gives it a leg up in hierarchical organizational structuring.  Levels of advancement are well-structured (prof, to tenured prof,  small community organizer to national organizer....).  Red pilling's only structure is pyramidal social network status.  Take Scott Adams for instance.  His popularity is largely based in his ability to persuade (or red pill) people.  Similarly with social media stars.  Their reach is a function of their conversion abilities (or perceived abilities to covert - for instance, I doubt Alex Jones converts many people, but adherents think of him as capable to do so if people would only listen...  There is lots of good academic stuff on the dynamics of true-belief zealotism in relation to conversions)

Universality
The ability to scale up either conversion ritual should radically affect its memetic success.  But, I don't think its possible to even theorize about which one works better.  It is a case of near equal fitness between two adjacent levels of selection: individualism and collectivism.  While environmental and societal conditions may affect relative rates of how the population as a whole responds, I don't think you can glean any information about how the process goes at the individual level.  I also suspect there is way too much noise at the societal level to guess what is a better fit.  The best one can say is that different types of people will prefer different approaches.  Those who have lost religion will probably need the homeostatic balance collectivist approaches offer.  Those who have strong community or religious ties, probably don't need more collectivist biased balance.

Costly Sacrifice
One of the insights from the science of religion is that high-commitment costs are associated with increased memetic virility.  Thus old Christian martyrdoms (in the arena and helping plague victims) were an important dynamical aspect in Christianity's rapid expansion.  On this front privilege definitely wins.  Red pill's main sacrifice involves sunk-costs.  However, privilege definitely has some costs - at least in theory.  Often costs accrue at the group level.  For example affirmative action has group costs.  Not speaking up in a meeting to give people of color space, has limited costs.  In practice I doubt many average adherents actually sacrifice jobs, college admission, or safety.  Of course, I could be wrong.


Coolness
Never under-estimate the role of rebellion and prestige bias.  While self-sacrificial flagellation for the betterment of society as a whole is definitely a sign of elite status, as Peter Turchin shows, its also a good way for an elite class to keep the potential-elite class down.  As the costs of elite status increase, pseudo-elite impoverization increases.  They just can't keep up with the Joneses.

In some cases, full rebellion becomes cool.  Why pay so much for something that has little chance of ever working.  Why not change the rules?  I suspect Red Pilling has a leg up on Privilege here.  Privilege sets up a classic "race-to-the-bottom" competition.  Red Pilling doesn't.

Plus, Red Pilling has just the right amount of nebulousness.  Things that are well defined, like privilege academics, have greater potential universality.  But, in practice, things that are just a little bit ambiguous have more persuasion and memetic power.  Social simulations show tight rule bounds groups can't become as large as looser groups.


Branding
Right now the packaging and branding of Red Pill experiences are probably on par with those of Privilege.  Perhaps because privilege has been around longer, it now seems to come across as a bit more of an ideology rather than as an experience.  Anyone who has watched a Q&A of a controversial social figure has probably heard audience members thanking a speaker for their role in "coming to terms with my own privilege", or "getting me started on the red pill".

While it may just be me, The Red Pill, seems more amenable to tight packaging.  Did you "take the pill", vs. "did you admit your privilege".  The former just seems more marketable - it is more visual and more concrete in the way baptism is more concrete than a profession of sin.


SUMMARY
Secular group movements often resonate around religious dynamics because of the fitness (genetic and memetic) of this cultural evolutionary solution.  It works for a reason, and this reason is minimally based on supernatural agents (for instance, moral big brothers are a functional non-supernatural replacement for many modern scenarios).

Interestingly enough, conversion stories on both sides of the hot culture war are concretizing. Full group membership may soon require such epiphanies.  The historical experiences of world religions are illuminating.  Groups that have successful group member recruitment strategies, tend, over time, to win confrontations.  This means there is high selection pressure for things which aid this drive.  The formalization of ritual is a proven strategy.  Rituals which afford the participant a chance at transcendence (a spiritual confirmation) are more memetically fit and more individually significant. They provide a strong initiating and bonding experience.  The concrete nature of such experiences makes them easy to commodify and share.  In short, I'd be very surprised if any successful highly moralized group endeavour did not, over time, resonate around some type of conversion experience.

The parallels between protestantism and Catholicism are a bit uncanny.  This might be due to a limited number of wells within this cultural-cognitive landscape.  Or it might be an artifact of clear Protestant and Catholic traditions within North American society.  To me, the natural explanation seems more parsimonious than the historical explanation.  Nonetheless, religious insights offer some interesting ways of looking at what is currently happening in society.