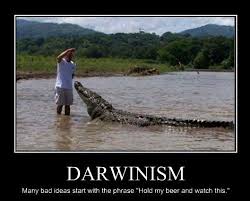 Sociology has a long history of struggling with the micro-macro problem. The micro-macro problem tackles transitions between individual properties/behaviours and group properties/behaviours.  During the founding of formal sociology, Durkheim was quite adamant about not trying to reduce the group level (sociology) to the individual level (psychology).  Academics who have tried to bridge these disparate levels have not been successful.  Both the "why" and "how" of cross over remain intractable. (See Sawyer's amazing book on Complex Sociology for solid history applicable to any study involving human dynamics)

Multi-level selection theory avoids the "why" and "how" of micro-macro cross over by taking a ground up reductionist approach leveraging gene fitness/presence as a unit of measure.  In terms of my chosen problem of educational reform resistance, mimicking this strategy makes for a rather elegant and parsimonious approach.  Ignore explanatory reasons for reform resistance by positing some form of dyadic tension (multi-level tension).  A specific dyadic tension will yield a characteristic dynamic curve.  Agent based modelling or equation based modelling filters reasonable dyadic choices based upon observed education reform data. The crux involves finding the right unit of measure.

Such an approach belies a number of philosophical and theoretical assumptions.  Off the top of my head, I can see having to worry about: 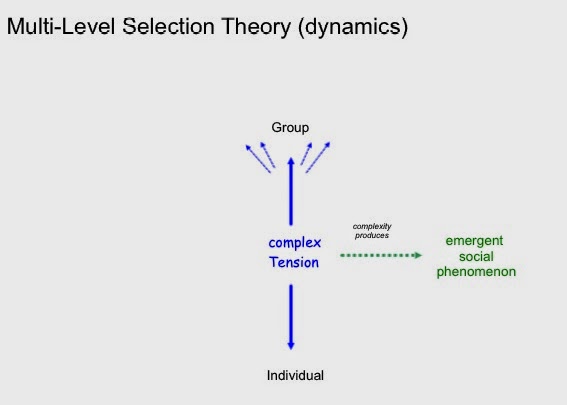 In multi-level selection theory the group and the individual exist in dynamic tension.  Sometimes fitness is increased with more groupish behaviour, sometimes fitness is increased with more individualistic behaviour. If I were a sociologist, I'd be very tempted to think of social behaviour as an emergent property of this dynamic tension.  However, my academic interest involves seeing whether or not this class of dyadic relation can adequately characterize educational reform resistance physics.

As I've thought about multi-level section theory (image on the left), I've been trying to figure out if "group" & "individual" best represent strange attractors (a complexity approach) or boundary characterizations (a process philosophy approach).  Conformity with reductionist or non-reductionist philosophical stances are impacted by such operationalization.

Strange Attractors
A strange attractor operationalization of multi-level selection theory seems like a good fit for interpretation at the level of the individual.

However, modelling of ed reform resistance as dynamic tension between groupish and individualistic attractors may be unwise.  What is the attraction acting on? Individuals? Groups? Genes? Behaviours? Picking a level of attraction walks you right into the micro-macro problem.  This seems messy and does not fit well with multi-level selection theory*1.


Boundary Labels
Analyzing things in terms of the group leads me to interpret "group" & "individual" as end states/boundary labels. A confluence of groupish processes would suggest I'm in the group state (for a particular aspect of analysis).  A confluence of individualish processes would suggest I'm in the individual state.  In this sense neither "group" nor "individual" are attractors.  They simply represent rough characterizations imposed by the role of an interpreter.

Process philosophy is well suited for non-reductionist questions where we don't really care why you're in a given state, only that such a descriptor is reasonably apt.  Process resists reductionist impetus to drill down. In a process sense, sufficiently complicated underlying dynamics produce multiple competing processes whose aggregate results vary in time.  We don't care what those underlying dynamics are, just that they fit observed characterizations for the time scale of study.  For example, emergent social phenomenon are the result of various combinations of group processes and individual processes. This amalgam is better characterized as social phenomena rather than specific combinations of group states / individual states.

A process approach is a non-reducationist strategy that avoids questions of driving forces.  This comes at the expense of expense of rationalizable/reductionist explanatory power.


THE CRUX
Multi-level selection theory seems to have avoided the conundrum of process & reductionism by finding an unambiguous unit of measure (the gene).  Cognitive scientists studying the science of religion seem to have done similar things by finding invariant heuristics (darwin machines as some call them) expressed or not expressed in religious vs. a-religious populations. Is a dynamical study of education reform resistance destined for the the cognitive science heuristic approach?  Probably, but for the moment I'm content to find some plausible physics that constrain the problem.


NOTES
*1.   Multi-level selection is a non-functionlist theory.  As such, it does not frame things in terms of attractors.  This assumes intent, and D.S. Wilson, the creator of multi-level selection theory, isn't philosophically naive.  Genes are not "attracted" to groupish states or non-groupish states.  They are mind-blind.  Operationally, genes serve as a unit of measure: is a specific gene present/expressed or not.  Different levels can be analyzed, but any level reduces down to the genes.

When exploring functionalistic forces for individual-ishness vs. group-ishness the chances are pretty good that you'll wind up in cognitive psychology or evolutionary psychology land looking for cognitive preference and tendencies.  While this landscape is really, really interesting, I suspect you'll wind up doing cognitive science work for a lot of necessary but not sufficient causes.  You may even be tempted to do some agent modelling to filter plausible causes based upon observed dynamical properties.  Like I say, this sounds pretty fun.  The results, like those emerging from the cognitive sci and evolutionary psych folks doing science of religion work, may even be groundbreaking. However, it just seems like stamp collecting to me…

In his foundational book "In God's we Trust", Scott Atran outlines a bunch of cognitive preferences and heuristics which lead to religious group formation and religious beliefs.