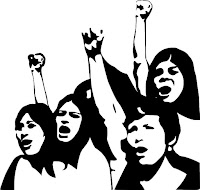 Scott Adams has a interesting post up this week.  Rather than his usual discussion about large-group persuasion, he proposes that social media (in this political season) has become the new source of US political power.

This is a rather interesting idea.  I mention it here because of its link to large group dynamics and cultural evolution.

The founders of the United States designed a system in which voters elected smart people and those smart people ran the country. They called it a republic.

Over time, money corrupted the system. Rich people became the real power. The rich controlled the media, and that was enough to control the minds of voters. Let’s call that system a type of “economic fascism.” By that I mean the real power is the top 1% (as opposed to one dictator) and the rest of the country has no real power.

Society has improved a great deal under economic fascism. Slavery ended, women gained equal rights, and gays are getting married. We also have lots of social nets and whatnot. But that stuff only happens because the top 1% is okay with it. As long as the rich get richer, the people at the top are fine with any other change. The rich don’t want the poor to riot, so some policies have to favor the masses. Drug cartels operate the same way. They provide social services to put the locals on their side.

In 2016, our form of government took a new turn. Thanks to social media, the most persuasive ideas can always find an audience. The top 1% are no longer the gate keepers of truth with their control of the media. Now any good persuader can rise to the top of the influence pile. All he or she needs is a smartphone.


So Adam's proposed (cultural) evolution of political power is:

Academics will certainly fuss about his broad generalizations.  However, it doesn't pay to lose the forest for the trees.  The interesting point (for large group dynamics) is the thesis that replacement of economic-strings with social-populism-strings is underway and that the Trump phenomenon may have instigated a rapid phase change in this regard.


SWARM TENDENCIES: LARGE GROUP INSIGHTS
From this social-manipulation lens, mob mentalities are the new norm.  Swarm effects have overshadowed the leverageable effects of money-politics. Money's lap-dog, mass media, is seeing its power to sway overcome by social media.  Social media swarm factors have negligible intersectionality with back-room money power structures (for the moment at least...structures have a way of winning long wars....).

While its not quite right to say popularism is the new de facto currency of political power, it seems correct to say, that since we're now in the midst of the long-foreseen identity wars, the ability of groups to convert, mobilize and compete against other groups* is more important than it has been for a long time.  Additionally, these identity groups are competing in an environment that seems to have fairly strong group selection pressure (MLS1 type).  The dynamics probably have a lot of parallels with new religious movement dynamics.

Social media has very strong local effects.  Society's general moral destabilization means that localized environmental effects can have significant global effects.  Our socio-moral system is in an unstable equilibrium. Localized phase changes may have minor global penetration, but their cumulative effects (via primary, secondary, or tertiary effects) are anything but environmentally negligible.


QUASI-RELIGIOUS INSIGHTS
On the quasi-religious end of things, social media mobs and their swarming propensities are highly actualized by sacred value formation & breach.  Thus, as swarming's power becomes more noticeable, it should be leveraged more and more.  Sacralized hypersensitivity is to be expected.  As history shows, outrage is a virtue in inter-group conflict (at least up to the point where it engenders real existential destruction).

In fact, this seems to be what we're seeing.  Well intentioned identity-based groups are becoming more and more hyper-sensitized (think over-reaching micro-aggressions).  The sacred important ascribed to things that the uncatechized would see as fairly innocuous attests to this.  Moral outrage & the ability to swarm confer real group benefits upon individuals.


MULTI-LEVEL SELECTION INSIGHTS
A multi-level-selection analysis of Adam's swarm based political power suggests loose confederacies will form and dissolve while fitness advantages between various groups and various group orientations are indeterminate.  To me, this is Adams point.

I suspect he sees weaponized complexity leadership expressed in the social media domain and actualized via quasi-religious dynamics as a steady state solution.  I don't.  I see it as a temporary state which enables in-group and out-group oriented components of a meta-group to get back together and eject free-loading power usurping radicals.  In this regard, I take Sigmund's Tides of Tolerance model to heart: a small preference for tolerance (out-group orientation) grows until there's a loss of connection with the reasons for tolerance. At that point, there's a temporary phase change to intolerance while the system resets itself.

Thus tolerance for its own sake reaches a crisis point: its ubiquity engenders massive meta-analyses.  This often takes the form of a "great religious awakening".  When morality emerges from its implicit shadows, multiple moral expressions compete.  Pretty soon everyone is offensive to someone. Intolerance keels over from its top-heaviness.  New norms are established.

ARE PERPETUAL SWARMS STABLE
Of course, the real question is whether perpetual swarms are stable (like Adams proposes).  I don't think there's a definitive answer for that.  Political theorists during the French revolution era considered popular democracy unstable.  History has proved this naive (at least under the right GDP conditions). So what's an appropriate time frame for stability judgments? 1 year? 10 years?

Based upon the historical pattern of moral instability lengths during religious awakening cycles and other periods of moral instabilities, swarms seem stable on the order of a few years, but not on the order of a few decades.  But, just because this has hitherto been the case, doesn't imply it will always be the case.  So, can a swarm pattern be stable on a decade order?


ANALYZING LIKELY SWARM STABILITIES
Multi-level selection theory is mute on this topic.  The best it can do is suggest (via historical deduction) that:


From this analysis, 3 (nesting under a large-group) suggests swarms and power to control swarms will eventually become dominated by a successful group or by an emergent nexus group.  Swarms are not stable, or swarms are indistinguishable from current political parties (although under the new swarm influence we may see an eventual move to a multi-party system)

1 (competing small-groups) is what Adams seems to favour.  I'd suggest it is unlikely to stay tenable over many years because:
While we're certain to see groups combine and dissolve (2a & 2b) I suspect, over time, these players foci (combining & domination) will be localized rather than globalized.  Global actions are likely to be costly commitment displays: useful for beefing up in-group commitment, group status, and keeping new recruit levels sustainable.

2c (proselitsim) is the most interesting option.  The history of 2nd & 3rd century Christianity is illuminating here.  Costly christian commitment displays, like helping plague victims, and martyrdom, seeded sect growth remarkably well.  However, I doubt a twitter triage or a publicized career suicide has enough commitment cost to function at the evangelical level needed....  However, I could be wrong.

CONNUNDRUM
This presents a conundrum for swarms.  They must have a ripe target (i.e. cis-gendered white males), but can't risk alienating too many people or else their source of synergistic energy will shrink (unaffiliated actors).  However, I've already mentioned that once everyone is someone's target, sacrilege loses its power due to pluralistic dilution.  It's impossible to limit a big trump card to just a few people's hands.  Scott Adams, however, alludes to the idea that truly great persuaders may always be able to stay one step ahead of the curve: continually finding new sources of unique outrage.

CONCLUSION
Thus, I think swarm power is likely to have a good run for a few years.  After that though, I can't see it having much staying power.  Power brokers will certainly try to harness it as much as they can.  Every so often it will catch. But, over time, ground-level swarm power will be surpassed by structure.  Successful structure will likely be a combination of old and new power (back-room machines & social media swarms).

However, to me, swarm structure is unlikely to be much different from current religion.  Certainly it will be secularized and non-supernatural.  But, as readers already know, I don't think supernaturalism is great boundary for religious dynamics.  What this means is that politics is likely to merge with secular quasi-religion and we'll be doomed to have to relearn the lessons that gave rise to the separation of church and state.

Notes
* Of course I'm referring to groups within our society