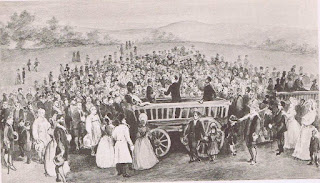 In the 90's the rise of the religious right, rapid growth of Evangelical Christianity and the growth of costly commitment religions (& decay of low cost religion) had some people speculating about another great religious awakening.  However, the glass ceiling of criticality was never broken.  While change occurred, phase change did not.  The US did not unite behind a new religious form nor ideal.

The slow but steady growth of (some) academics' quasi-religious labelling of the (evangelical-like) social justice movement has me wondering though... have scholars missed this century's religious awakening?

In this post, I'll quickly explore whether outdated reliance on supernaturalism-as-religion has led people down the wrong path for the religious phase change markers associated with great religious awakening cycles.

Academically, supernaturalism is a convenient tether against slippery slope definitions of religion. Without some hard lines you face social science's "open borders" conundrum: eventually anything goes. In this case, anything with interesting social dimension becomes a "religion" to someone.  I disavow this notion. Individual approaches to the social science of religion are blind to phase change dynamics.

Multi-factor approaches are one way of framing religious definitions. (Probablistic) Checklist approaches seem more valid than necessary condition definitions (think 5/7 factors vs. these 3 properties).  However, without rigorous (and nigh impossible) quantitative modelling, multi-factor definitions tend to fall into an "appeal to authority trap": categorization evolves into a highly opinionated game based upon who (or what) is in the in-group.

Other approaches leverage a process philosophy (i.e.. functionalist) approach: religion is best framed in terms of religiosity, its purposes/functions and internal personal significance. A bastardized version of this lens would have one looking for things like:

From this angle, general trends toward the progressive secular state, while unremarkable by themselves, take on a different light when framed by the quasi-religious spin offs the progressive-secularlist landscape has enabled.

Now, I'm certainly not saying we've had a phase change to a progressive based quasi-religion. I'm simply saying that things like progressivism have evolved a level of morality that facilitates an ever increasing number of people to treat what it facilitates religiously (mainly via value sacralization & identity fusion).  The phase change is that questions of morality emerge explicitly & ubiquitously.

The river of history would therefor be something like:
This final shift is what heterodoxes like me hope for: The great religious awakening of progressive morality (and all the quasi-religious experimentation and conflict that goes with it) breaks down social cohesion and social structures.  This loss reaches a point where it has real cost (for example post-secondary's can't have real academic discussions on many topics, or immigration pro's & con's can't be discussed).  The hoped for result (which follows the pattern of a variety of religious awakenings) is that people settle on a set of norms that facilitate interaction & communication.  This relegates (through popular de-ligitimization) special interest concerns into non-universalizing ideological/religous safe spaces. Specialized sacrileges get worn out.

See Beneke's Beyond Toleration for the full cycle as situated in the 1730's great awakening.

Thus, this century's (possible) religious awakening is about multiple moral based approaches to progressive secularism appropriating quasi-religious like dynamics.  The phase change is people's ubiquitous involvement in social re-norming.  Every permutation is explored (Trump, Black Lives Matter, Oregon Standoff, Safe Space, etc).  Every permutation is challenged. Everyone movement competes for sustenance. But the real dynamic is that because multiple moralities are sacralized everyone becomes a sinner to one group or another.