The last couple of weeks I've been working on the question of quasi-factuals' role in societal coherence.

A couple of relevant papers I've been working through are:

But, its been tough trying to figure out the ground for quasi-factuality.  Standard interpretations are that quasi-factuality
But this weekend I suspect I un-intentially stumbled on something that makes more sense for me.

BACKGROUND
Bret Weinstein has a little linguistic game: Are whales fish?  The easy answer for many is no.  They are mammals.  The pragmatic answer some give is yes, they are in the water.  The obtuse answer is yes, because of a common phylogenetic ancestor.  Thus if the answer is "yes", you don't know if the person is being simple or opaquely erudite.

In the land SJWs: there is only power. Defending an SJW-targeted-person is a serious violation. Doesn't matter if they're right. "Right" and "wrong" are tools of oppression. Errors don't occur. If you're cornered, you're wrong, by definition.

Only a witch would defend a witch
— Bret Weinstein (@BretWeinstein) February 10, 2018


At first blush this seems like a simple twitter rhetoric. There is no escape from being a witch. So you can either assume the simple "fish" interpretation, or you can assume something more adroit.  Obviously lots of people missed this. 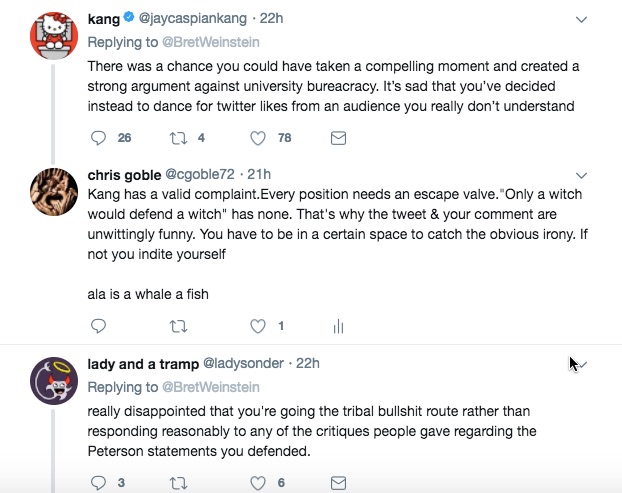 But there's always a chance you're falling into the same trap.  Hence when I got the following response, was I being trolled, or was this a simplistic fish?

the next time you consider asking a woman on Twitter if she "caught the irony", prior to explaining humor to her like a child, please instead make a cup of tea and go do something else.


Simple vindictiveness (simple fish) or higher irony (phylogenetic fish)?  There are definitely two ways to take it.  She was trolling for me the obviousness of Bret's original irony, or she was truly a bit opaque.  How do you signal which?  Well you keep playing the higher irony hand which makes each iteration a bit more likely to generate cues.

And the next reply was, unfortunately, were the cues ended and the fish was caught (which unfortunately prevented a rather witty reply from me about catching someone in a rhetorical line or evolving a discussion)

IMPLICATIONS
Its always sad to anti-sociality instead of erudition, this did make me wonder about a little discussed point of counter-factuality.

To what extent have quasi-factuals stabilized as a way to signal potential sub-groupings whose broadcasting otherwise might get people into trouble?

The big issue here revolves around the role migration plays to maintain necessary altruism levels within a group.  As Nowak and other have shown, you need a certain level of immigration to prevent altruistic collapse.  Altruists also need to be able to sub-organize.

Now when you tie this idea into the increasingly popular perspectives on "metaphorical truth", you get an interesting solution space.  A fairly significant class of quasi-factuals have enough flexibility to code "metaphorical" truths.  Thus while laity may take them fairly literally, the presentation of the quasi-factual has enough nuance to signal the extent to which someone sees something more fundamental and probably pro-social in it.

Right now I would say yes. They allow sub-group signalling.  They provide space for the evolution of "metaphorical" truth even within the lay population. They are memetically fit due to slight counter-intuitiveness.  They also facilitate engagement with out-groups.

If you've ever engaged in inter-faith dialogue, one technique is to provide people with an "easy out" for what you are talking about.  Often this is as simple as  "of course, X and Y think this doesn't work, and they may be right, but...".  Quasi-factuals enable the same thing. Out-groups can easily reject what you are talking about.  They just need to zone in on an a-factual element.  They can even ridicule that amongst themselves. However later ridiculing is sort of like carrying spores home to throw in the fire. Some won't burn.

So, I am very grateful to twitter vindictiveness for teaching me something I wouldn't have picked up anywhere else.