The Supernatural Problem in Quasi-Religion

One of the critiques that occurs when applying a religious or quasi-religious lens to modern secular cult like groups is the absence of supernatural agents.

But, as I've said before, this problem usually comes from trying to generate one-to-one superficial maps onto questions that are best addressed via dynamical similarities. For instance if you focus on modern shirts, what happens when you run into a toga? The superficial features don't match. But the functional features do.  From another perspective, the level of precision used in defining shirts was too great.


ATRAN, NORENZAYAN & THE SCIENCE OF RELIGION 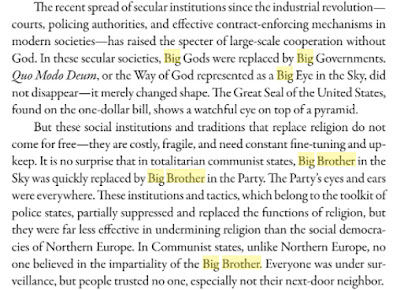 The basic idea is that what matters is what effect an imagined Big Brother has on people.  Embodiment, such as occurs in paganism, simply makes the Big Brother seem more real, facilitating guesses about what they may like or value in any given situation. Similarly, supernaturalism, simply serves to increase the potential punishment and rewards a Big Brother can provide. Plus, it adds a bit of counter-factuality to increase memetic fitness (see this post of mine)


Individuals may form a group agent in virtue of evolutionary selection or cleverly designed incentives to act as required for group agency, perhaps within independent cells.  here the individuals contribute to the group agent's performance, but do not explicitly authorize the group agent, the need not even be aware of its existence. (p. 36)

One of the challenges is how to make a Turing machine aggregator "rational".  They take a fairly generous approach here simply saying that the aggregate needs to :

They also add in the need for binary attitudes (but that is more to tie up details associated with a rigorous formal logical approach).

On a whole, this boils down to something like the Turing test.  The aggregator is rational if people ascribe intentionality to it.

While their work has tonnes of depth and fascinating detail,  I'll resist tangent-temptations and pull another quote.

The supervenient relation between the members' attitudes and actions and those of the group can be so complex that the group agent may sometimes think or do something that few, if any, members individually support.  And secondly, the supervenient of the group's attitudes and actions on those of its members is entirely consistent with some individuals being systematically overruled on issues that matter to them a lot.  Accordingly, the kind of control that individual members must be able to exercise in order to enjoy effective protection has to be stronger.  It is not enough for individuals to be able to contribute to what the group thinks or does on the issues that particularly matter to them.  They must be individually decisive on those issues.  Roughly speaking, we say that an individual is 'decisive' on a particular issue if he or she is able to determine fully -  and not merely in conjunction with other individuals - how this issue is to be settled. (p. 130)

This leads to a very interesting (and rigorously argued) conclusion: group agents 'control' individual actors via attitude biasing.  This is in stark contrast to usual definitions of control which assume the application or threat of application of formal power.  Here's another quote on this:


Since our definition of control has taken the group's attitudes, rather than its actions themselves, to be the targets of the individuals' control - the reason being that the group's actions are usually mediated by its attitudes - we can focus, once more on the part of the organizational structure that is easiest to model theoretically: its underlying aggregation function. (p. 136)

As mentioned the aggregation function is based in attitude biasing.  More specially it is a type of espoused, and complexly aggregated, morality.  Here are a few more quotes to take us to the end.


To be a person is to have the capacity to perform as a person.  An to perform as a person is to be party to a system of accepted conventions, such as a system of law, under which one contracts obligations to others... In particular it is to be a knowledgeable and competent party to such a system of obligations.  One knows what is owed to one, and what one owes to others, and one is able and willing to pay one's debts or to recognize that censure and sanction are reasonable in cases of failure... But non-persons cannot be moved by being made aware of obligations they owe to others. (p. 173)


To be sure, group agents are not flesh-and-blood persons.  They are pachydermic and inflexible in various ways, and lack the perceptions and emotions of human individuals.  But they nonetheless have the basic prerequisites of personhood.  Not only do they form and enact a single mind, displaying beliefs and acting on their basis.  They can speak for that mind in a way that enables them to function within the space of mutual recognized obligations. (p.176)

For example, highly moral groups usually have more influential Group Agents (Moral Big Brothers) than weakly moral or a-moral groups. It is the dynamics that matter.

In terms of modern secular quasi religions this means its the dynamics of the feedback from the Group Agent to the individual that matter.  Groups that have significant Group Agent feedback combined with sacred values, ritual, costly commitment displays, and steep in-group out-group gradients are highly likely to be "religious".
Posted by chris goble at 4:48 PM