Lessons from the Rise of Religious Toleration 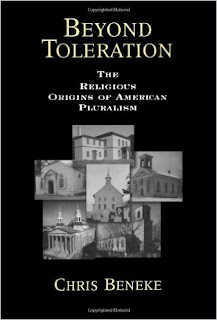 In the mid 1700's the rise of religious toleration had become firmly entrenched.  However full operationalization of religious liberty had not yet occurred.  Those familiar with today's progressive debates will recognize parallel issues of trust, power dynamics and linguistic misinterpretation.

Anglican's wanted to increase their organizational level by getting a Bishop for the country.  Presbyterians did not want to concede the implied Anglican universality this could entail.  According to Beneke,


neither side could frame their arguments in the traditional language of toleration, nor yet fully concede to their opponents the religious liberty that they desired for themselves. (pp. 126)

Bennett goes on to say, "with the rise of religious liberty, there might be no more innocent words."

This scenario sounds eerily familiar to today's culture wars.  The battles around literal fact vs. perceived intent also parallel what is happening today.  Today something can be factually accurate, but still be speech which is banned (or de-facto banned): just think about the sociology vs. science of race & culture.  In the 1700's the tension surrounded labels of sinful behaviour/belief thrown from one religious tradition onto a different religious tradition.  While such accusations were technically correct, the intent of such messaging and the likelyhood of offence overwhelmed technical considerations.  Tolerance wasn't just about accepting others, it was about minimizing friction on non-essential issues.

In 1700's America, the key to eventually overcoming this conundrum was purposeful statements from both sides that they did not want to change the other: that they were both part of a larger national body.  The rise of religious migrants (converts from one sect from another) enabled deep insight into a given creed's hidden messages and agendas.  People became so sensitive about hidden agendas that trust broke down.  Society started to fracture.  It was saved by a heterogeneity.

Heterogenous interaction enabled people to see that their neighbour from another sect wasn't really the spawn of Satan, like perhaps their over zealous minister was suggesting. A large group oriented society had benefits that surpassed that offered by within-group purity.  A new cultural group level emerged.

So how would the evolution outlined by Beneke above play out for a resolution of today's culture wars?  The first step would involve both sides truly accepting the internal logic and internal value of opposite positions.

Opposites need not be seen as "right".  They do, however, need to be seen as plausible (within the assumptions of an alternative paradigm).  Large group moves to universalism generally require a commensurate surge to the value placed on commonalities.  In the progressive battles of today, this could mean a surge in nationalism or a surge in "human right" type thought.  I suspect"human right" universalism opens the gate to wide for large group survivability.  However, this will likely raise existentialist hackles. The end game of true universalism is the loss of the UN styled nation state.

What to Watch For

Costly display rituals/tests are an adaptive way of seeing who is and is not a group freeloader.  Acts which go against your own individual level self interest are unlikely to be done by group members who function on the group's periphery.  Neither are they likely to be done by those who are not very committed to group function.  Thus seemingly counter-adaptive acts actually function adaptively provided they purify group membership and strengthen group function.

Current examples of self-hate of privilege (i.e. upper middle class white people saying people like themselves deserve to be targeted by oppressed ethnic groups due to their inherit privilege) are hard to rationalize with anything other that costly display commitments against one group (a socio-economic group) and for another group (ideological based group).

This becomes very interesting when you look at the changes in adaptive grouping and group levels which are occurring.
Posted by chris goble at 8:39 AM No comments:

Scale is one of the major challenges in educational reform. Extending localized successes has proved to be an intractable problem.  Broad reforms can sometimes change superficial institutional structures (i.e. principals as instructional leaders rather than business managers).  Usually, however, reforms simply change the practice of small clusters of teachers, perhaps even the practices within a few schools or charter school-networks.

Elmore in his insightful School Reform from the Inside Out book says,

The good news about existing reform strategies is that they tend to galvanize commitment among the already motivated by concentrating them in small groups of true believers who reinforce each other.  The bad news is that these small groups of self-selected reformers apparently seldom influence their peers.


It's hard not to interpret ideas like this in terms of multi-level selection theory: people tend to be drawn to self-reinforcing, adaptive groups which have evolved protection from freeloader and dictatorial abuse.