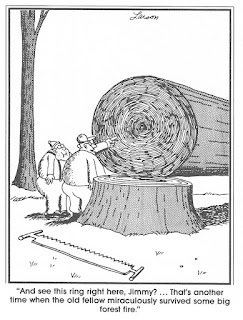 I'm going to explore some problems with creedal statements by looking at a case study in K-12 professional development.  The academic intent is to explore group-dynamic wells.  Here I'm assuming a group-dynamic well is a solution which is evolutionarily probable due to resonating formational feedback processes*.

Case Study
Many educational reform fad programs incorporate mantra-like moral appeals.  For example, Professional Learning Communities (PLC's) rally around the morally impregnated idea that "all children can learn".  You are at a significant moral and rhetorical disadvantage if you try to qualify this statement in any way.  That is why the mantra works as a tool of educational reform.  It is mimetically and rhetorically fit.

So let's think of this statement (and the colour associated with its surrounding training) as a creed.  It may not be technically nuanced like the Nicene creed, but this is offset with explicit supporting orthopraxies.

Creedal Dynamics
The production of the creed itself really doesn't split the population.  Teachers are pretty accepting of all sorts of educational philosophies - as long as they have the best interest of students at heart.  Continued public recitation of the creed, however, does split the population. The creed is no longer one among many individual (or loosely coupled opinions), it is a rallying point.  After public recitations typical reactions I've heard from teachers include:


In this particular case, the creed was less about nuanced technocracy and more about reform dynamics.  It engendered debate along the lines of right and wrong not academic precision.  Why?  Because the central tenet was both moralized and injected into a morally infused landscape (education).

Acceptance of the tenet was re-enforced by "empirical studies" and a logic grounded in structural supports.  Tenet "rejection" was remediated with principal and central office supports.  The outcomes teachers actually produced (student academic effects) were blatantly disregarded.  "Just because what you are doing works to a certain level doesn't mean you can't do better.  You do want all children to learn and learn at higher levels, don't you?"

What was assessed was creedal compliance.  Compliance was assessed largely by observed degree of espoused commitment & enthusiasm toward implementation supports or the foundational moral mantra.

Mid-Term Results
Several years after creedal bifurcation things have evolved as expected.  There is a cadre of true-believers, a fairly large cadre of superficial compliers, and a big swath of teachers in the middle who hybridize practices to try and do what is best for students and the system in general.

But creedal thinking is anathema to hybridization.  In the particular context I'm describing, having the right outcomes is less important than being trusted to have the right ideas and attitudes.  After all, the right idea and attitude ensure things are headed in the right direction. Good-enough outcomes are assumed to have all sorts of theoretical problems whose insidious results are hidden by superficial and imprecise assessments.


While one would be very naive to assume a simplistic creedal statement facilitated tribablization of a hitherto extremely unified population, you really have to bury your head in the sand to think that formalization of belief and morality played no role in the dynamical changes which ensued.

Moral based creeds enable the dividing of in-groups from out-groups.  You then have a probabilistic likelyhood for highly efficient norm detection dynamics to kick in.  This changes the cultural landscape.  And while tribablization isn't guaranteed, it becomes more and more likely that self-organization will produce groups selected for adaptive operation (i.e adaptive groups as per multi-level selection theory).

That's the point where this case study is now at.  A fight is on.  The old creed statement is, at best, tangentially related to current tribal lines. Things are now framed as a fight between insiders who know what is really going on and outsiders who don't.  Unfortunately both sides see the other as the "real outsider".  When fights occur, moral based language emerges.  The dynamics of social exchange theory kick in and the dividing lines intensify.

Both sides view their morality as the one true unifier.  However one side takes a pluralistic approach - let us do what we want, you can do what you want.  We're different.  The other side takes a homogenizing approach - we need to be unified, because any allowance of ineffectiveness is itself immoral.  When push comes to shove, one side trots out its creedal test "do you believe all kids can learn or don't you"?  But now the other side trots out its moral test "do you believe teachers are best situated to know what works best in their classrooms or do you think your answers are best?"

There are no clear answers to these questions.  It's not hard to find examples of a teacher's imperfections.  Similarly it is not hard to find problem areas in any one-size fits all solution.  Hypocrisy simply bets out-group bias confirmation heuristics.  "That group can't be trusted, they don't follow the morals I assume they should be operating within.  Heck, they don't even follow their own morals - look at all those hypocritical problems!"

The parallels with levels of selection within multi-level selection theory should be obvious to anyone mildly familiar with the field. 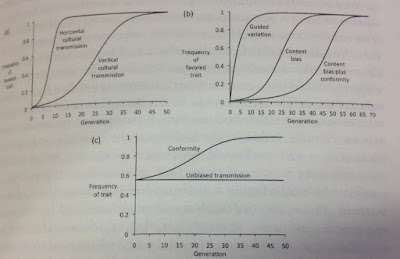 The introduction of creedal based thinking based upon moral rights-and-wrongs is probabilistically problematic.  It opens a well in which group-dynamics can produce feedback resonances which alter the landscape and produce phase changing behaviour.  As cultural evolution shows, this trajectory mirrors content bias + conformity bias curves.  It does not produce guided variation curves where each person individually stumbles upon an ideal solution.

But content and conformity are rarely strong enough or stable enough to transition to a higher level of selection.  Sub-group competition is highly probabilistic.  Sub-groups divide on moral lines.  New moralities enable emergent sub-groups to compete with larger or more powerful groups.  Pluralism can re-emerge, but in moderately moral institutions, like education, the chances of any "out of character" morality over-throwing the system is vanishingly small.  Education responds to societal level trends not planned reform.

So creeds initially create some potentially useful academic hubbub.  But, when infused with a moral element (purposeful or emergent), they foster tribabilizationn. This burns up human capital.  Conflict increases innovation (hybridization, invention, new weapons/articulations, etc.), but is very unlikely to lead to any long-term solutions.  In a sense, it is the larger system's way of experimenting with its environment.  At some point though, just with the protestant-catholic schism, a shadow system can take over.  And so while I see the evolutionary point of these hubbub cycles, leveraging morally iimpregnated creedalism just seems like a stupid idea that sacrifices long term human capital concerns on the altar of "well at-least-we-tried educational reform".

Notes
* For example, I would consider knapped spear points to be a behavioural well.  There is no purely abstract reason why arrow and spear points shouldn't come in a continuum of sizes or shapes.  In some sense they do.  But in practice, they tend to stabilize to a few solution classes.  Spear points tend to be optimized to fit success constraints around hand thrown projectiles.  Arrows tend to be optimized for spring propelled constraints.  Both inhabit a functional landscape which resonates with physical and behavioural constraints.  In practice then, cultural evolution selects for a certain class of product which are influenced by a physical-functional landscape.  It doesn't really matter what one's "first" spear point might look like.  Over time, selective forces (positive or negative) function like landscape wells.  Cultural-physical selection may be very steep at the start (you need a point) and then slow down (fine taper to thickness & radi tweaks).  This produces an R shaped trajectory typical of guided variation.  The group-dynamic well I'm talking about follows a content +  conformity bias trajectory.  Things are slow at the start, but resonating feedback produces an accelerating curve which then maxes out as between-group and within-group selective tensions come to equilibrium.

**For another perspective on leveraging moral based thinking in landscapes that produce ironic results, see  Donald Clark's excellent blog post on the same

Posted by chris goble at 7:46 PM No comments: