When Diplomatic Nuance Resonates within a Liturgical Well 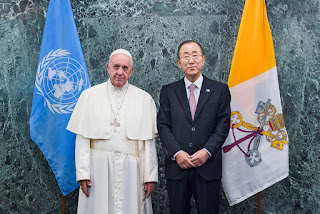 Historical caricatures of the coutier era (16th to 19th c) make etiquette hyper-sensitivities easy to imagine. Of course, at that stage of cultural evolution such sensitivities certainly may have been required for the borderless world in which people lived.  Now that the idea of the nation state is taken for granted (i.e. the cultural evolution of the idea has stabilized and selection of requisite behavioural norms has become broad & deep enough to surpass criticality) and the cold war is over, I wonder to what extent hypersensitive-etiquette is still needed?

LITURGY  (i.e Significane-Loading)
Religion tends to evolve rituals highly imbued with meaning. A change from a one deacon sacramental act to three deacon sacramental act can leave parishioners contemplative about intended meanings.  Just think about the depth of symbolism associated with smoke in the Catholic faith.  Or the order of colours in a plains Indian medicine wheel.

Of relevance here is the interesting psychological finding that monkeys and other animals tend to copy the intent of an observed action while humans tend to copy seemingly meaningless actions.  Functionalistic evolutionists seem keen to find adaptive reasons which can explain why this might be so.  Since I don’t like functionalist post-facto reasoning, I have little interest in why this might be the case.  I’m content accepting that it is the case.

Hyper-active agent detection systems synthesize casually unrelated items to produce plausible explanations.  Once a set of (real or non-real) causal-links achieve a memetically optimal solution, changes to the parts (actually significant or not to the causal solution) become potentially noteworthy.  After all, its not the intent that is copied, but rather, the minute of the parts are copied and then an intent is re-deduced.

But, the evolutionary landscape of religion suggests even more.  People seem inclined to need a certain “depth” to their belief.  Beliefs can’t be too simple, nor too obfuscated. They can’t have just one layer, nor can they have impenetrable depth.  Basically, case study analysis shows that over time religions stabilize at a place where ritual and ritual associated acts are ascribed great depth.  The way we copy information suggests that even potentially insignificant points can be ascribed great significance when they are changed, omitted or introduced.  The sacralization of mimetically fit rituals ramps up the potential significance of any change. Even minor changes could ruin divine perfection.  And who is to know what unintended consequences our own vanity/hubris could unleash via the butterfly effect.  Only God knows.  From an evolutionary perspective, one would probably just say people are very sensitive about norm breaking in group endeavours, especially highly sacralized highly implicit norms which are designed to ferret out free-loaders and out-groupers.

DIPLOMACY
Now I am not going to say that diplomacy is a spandrel of memetic well (specifically the co-evolutionary fitness of significance-loading).  Rather, my point is a more nuanced.

Once diplomacy is fairly settled and real conflict is fairly unlikely, people still seem to have a desire for highly nuanced highly significant diplomatic language and affects.

What are the chances of Germany and the U.S. going to war?  Pretty slim.  So why do we need sophisticated diplomatic language?  I suspect there is a reasonable amount of wire-tapping going on.  People are not clueless about the other side’s interests.  It is fairly easy to understand each other in relation to things that matter.  Maybe nuance can help a few trade deals here and there, but I suspect fairly frank language would, in most cases, work just as well. The chances of war-level offence occurring if the wrong adjective is chosen is probably pretty small.  Trump is, of course, testing this out, much to the chagrin of many elites and wanna-be elites on both sides.

My sense is that this is one of the reasons Obama was so loved.  He conveyed the right sense of gravitas.  His eloquence mixed with an affect of searching for just-the-perfect-phrase perfectly conveyed this.  There was something more to what he said. There is something less to what Trump says.  Perhaps true.  Perhaps not.

Do we really fail to understand what Trump is saying? From the hate levelled his way, it would seem people understand enough.  The hate isn’t about uncertainty.  Their is purposeful mockery of the lack of linguistically precision.  Mockery of gestures which really do seem to convey at least as much information as any well-crafted verbiage.  They is a hate of brutish frankness.  Perhaps it is because brutishness is truly offensive and can really cause wars.  But perhaps it is just because such affects are simply uncouth, boorish and ugly.  In essence, they are too coarse and so overstate things that could be understated while conveying similar-enough ideas.  One is yelling in your ear, the other is saying, excuse me, would it bother you to….

This is certainly likely.  But what I also wonder is if people have a natural tendency for liturgical depth do elite classes operate within this landscape in such a way as to produce clear delineations between those that can be entrusted with leadership (the elites) and those that can not (the commoners).  In other words, does it evolve into a demurrer of a priest class that supposedly has the training and skills to successfully navigate inter-group relations?

RECAPPING THINGS
So let’s recap and take a look at our data points.  People have:

My sense is that diplomatic affect, a fully rational solution to inter-group conflict minimization is subject, like anything, to the natural tendencies just listed.  As politics becomes more religiousized (& polarized), I’m not sure why it should escape the dynamics associated with moralized adaptive groups?

Those dynamics suggest hypersenstized in-group out-group demarkers.  These demarkers are more about internal policing than they are about external relations.  However, they do limit who gets to lead out-group relations.

This leaves some questions which I don’t think are really answerable (without just-so functionalism).  Do we “want” superfluous depth because:

Regardless of the answer to his functional question, I don't see how we can reject the idea that our religious tendencies bias us toward imbuing important inter-group relational rituals with extra depth and significance.  The bias effect may produce "just the right" amount of diplomatic sophistication. But, in a world where nations, especially Western ones understand each other really well and where existential conflict is increasingly unlikely, perhaps it biases us past what is needed? 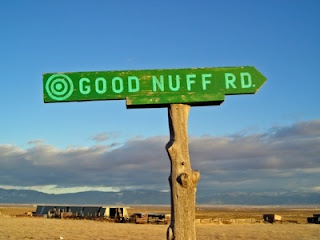 Perhaps this produces minor gains for fairly inexpensive increases in affect nuance.  But perhaps it produces religious-like dynamics that we post facto rationalize as necessary where in fact a much rougher job would be just as good?
Posted by chris goble at 8:00 PM No comments: 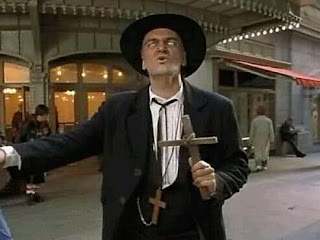 One of the interesting insights from Chris Beneke's book on the rise of American religious pluralism was the observation that pluralism emerged once ministers' hyperbolic rhetoric about other denominations was seen as both toothless and sensationalistic.

Priest classes exist in an interesting landscape.  To increase their power and reach they must stir up the populace.  This is usually done via rhetoric accentuating existential fears.  That tribe down the road is pure evil.  Or, this practice/behaviour is destructive and evil.  Of course this creates a competitive cultural landscape.  Reach is directly dependent upon virility.  Sensationalism is selected for.

But as Nowak's virus simulations show, too much virulence is counter-productive.  You lose your hosts.  But if you're too weak, you can't expand. Over long time scales moderate virulence stabilizes.  The moderation of syphilis is a classic example.  This solution balances both long-term and short-term selective forces.  (Another improbable solution is spasms of extreme virulence).

Priest classes face a similar quandary.  Once "everyone-else" is labelled an "egregious sinner" it is pretty hard not to see through the holes in this cloth.  Is your neighbour you've known for years really that evil?  Doubtful.  Is that person you trade with once a year really a sub-human? Doubtful.  Populist based priest classes are pressured into self-destructive virulence.  Here's a modern example.

This gives a whole new meaning to "Everyone I don't like is alt-right" #LindaSarsour pic.twitter.com/Nzo26pO42t
— Cathy Young (@CathyYoung63) July 19, 2017

A common path within this descent processes is the move from sins of commission to sins of omission.  Enemies become not just anyone who is against, but rather anyone who is not explicitly for us.


This is a high risk high reward strategy.  The mob mentality it relies upon is great for purges.  There is, after all, a reason why a number of people now liken this evolution in social justice activism to the dynamically similar 20th century communist purges, especially those by Mao.

Fortunately it takes a really nasty despot to successfully control the backlash engendered by the move from sins of commission to sins of omission.  Human's evolutionary past suggests the move to kingdoms was unstable precisely for these reasons.  Chiefdoms might temporarily ally during times of severe existential-level threats.  Power was usually divided between religious leaders and war leaders.  Occasionally though, the temporary war leader/coordinator and temporary spiritual leader/coordinator might be the same.  The temptation to maintain power over this new higher-level (temporarily) adaptive unit was sometimes too much to give up.  For a long time though, such leaders were routinely assassinated.  The supposition is that they could not muster a large enough, loyal enough force to provide adequate 24-7 protection.  Multi-level selection theory is a good lens from which to understand such dynamics.

Eventually though, after enough cultural selection and presumably enough cultural evolution transmission biasing epigenetic or genetic level stuff, the god-king solution stabilized.  However, from what I understand of the archaeology, it took a long time for the god-king solution to stabilize over any substantial period of time.  Egypt, China and the Indus valley are early examples of where individual god-kings broke into multi-decade stability.  One assumption is that stability started to occur as despot levels decreased and the fitness sacrifices of the plebes was offset by state benefits.  Basically, god-kings found out how to provide benefits while at the same time herd-like characteristics were selected for amongst the population.

What does this imply for today's crazy priest class activists?

The culture wars are over.  The progressive wars are ongoing, but slowing down and morphing into a number of distinct battles.  For instance, they've split into tactically distinct strategically linked campaigns like:


In the midst of this comes an example of the "Right" adopting the "Left's" long held arms advantage with respect to "hate speech".  In most cases, hate speech is simply any type of heresay against major progressive values.  It ranges from actual attacks based upon identifiable group characteristics to micro-aggressions to any non-supportive stance against intersectionally disadvantaged.  But a good example of the meme wars is the current brouha-ha over Linda Sarsour's Jihad comments (for those unfamiliar with her she fills a Milo Yiannapoulos like niche for the left.

Reminder that THIS is one of the leaders of modern feminism.

And the context which indicates she is using Jihad in its moderate sense as any struggle against evil.

Hey you people scare-sharing Linda Sarsour's speech, read this transcription, which I just made because you all are trash misquoting her. pic.twitter.com/mzBWN6mhl9
— Chris Geidner (@chrisgeidner) July 6, 2017

In terms of the meme wars, this is a pretty big shift.  Up to now the right has usually been at a substantial disadvantage in linguistical re-appropriation tactics.  It is a prime reason the culture wars ended up as such a rout.  The "rights" obvious tactic is to prevent any normalization of jihad, or presumably many other Islamic in-group terms.  Thus it would seem there is a reaction to fully "other" the intersection of progressivism and Islam.

In terms of battle lines, this probably makes sense.  On the cultural evolution front it is interesting to see how both sides are becoming so structurally similar - at least on the tactics & weapons fronts....

Posted by chris goble at 6:35 PM No comments: