It is always unwise to get into race related issues Skin colour is a much overhyped and overly simplistic measure of lineage. The genetic diversity of Africa is significant and simplistic single phenotype measures are naive, even if technically possible via gross statistical considerations. 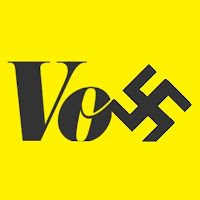 But, the Carlos Maza Vox'autoritan affair has gotten my blood up. I just hate manipulative bullies. Society's political commentary, as evidenced by any late night talk show, or any mainstream comedy show (like SNL) clearly accept fairly high levels of mockery. Mockery norms clearly include exaggeration of behaviours and affects.  How many OrangeMan jokes have you seen? How much comedy surrounding George Bush's mannerisms and speech have you seen. The mockery of powerful, political, and moral arbiters is an ingrained cultural norm.  Whether it should or not is of course debatable. 17th century Puritans certainly would agree that mockery and most forms of comedy are offensive. But, that may not be the wisest norm to emulate.

Punch-down rationalizations are certainly apt. Pareto distribution laws (or even simple linear scaling) ensures that minorities are unduly effected by by punch-downs.

This week society is confronting the extent to which individual or even identity based trait exaggerations are or aren't representative of society's strongest moral castigations - the various "'ism" sins.

The Carlos Maza affairs highlights the uni-dimensionality of abuse. That evidence is tangential to the interesting dynamic which has emerged. Part of it boils down to whether gay terms are of uni-directional use or not. In other words can only that group, and its well-intentioned allies, be the only ones allowed to use those people's/group's self-identified monikers? This is very reminiscent of the "N" word. I understand the linguistic and group value of uni-directional reclamation of the word - it switches the power dynamics that the word had. Therefore, reverse power over the word, as evidenced by only blacks being able to use it, is a logical way to re-appropriate the term and highly its shameful past and the past it embodied.

I certainly disagree with this approach. But, it is rational.

What the Carlos Maza affair highlights, in conjunction with uni-dimensional epitaphs, is the racialized role of modern ism sins. For example, look at this proud Maza twitter profile 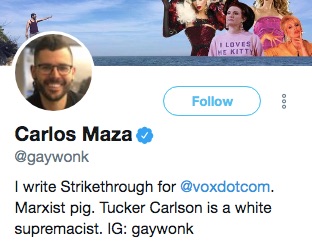 I think there is little doubt that Tucker Carlson, while liberally offensive, is not a white supremacist. You can certainly change the definition of supremacy to include anything that has racialized structural effects, but as we'll soon see the dynamics of how that play out end up supporting the concept of trans-racial epitaphs.

Maza, and MANY others, clearly use the white supremacist term as a racial epitaph. Grammar checker AI 's would certainly flag that term's usage as a derogatory.  That is how it is meant. But, that term is increasingly applied to individuals like Ben Shapiro, Dave Rubin, Candace Owens, etc., who clearly aren't white supremacists. Thus, the term is trans-racial.

But, the term purposefully connotes association to a racialized group's characteristics - true David Duke level bigots.  The para-religious association of these groups with Devil level sin is clear. White supremacist is meant to connote the worst of the worst associations. In that sense it is clearly an epitaph. It is racialized because its content is clearly meant to associate its load with a racial (white KKK) group.

But, you might say, its referential base (white KKK's) does not invoke all whites. This is true. But it is also true that many "black" epitaph referential bases only apply to sub-saharan populations. That does not diminish their racial referential intent. As a racial epitaph these terms are meant to blur sub-population distinctions.

That is the motte & bailey of "white supremacy term". It leverages all the negative associations of a sub-population, applies it without distinction to a broader population (eg. people's skin colour, which is now trans-racialized skin colour) for very purposeful derisional intents.

I just can't see how Maza's (and other's) use of white supremacy fails to meet all the conditions of a nasty racial epitaph. It is not just a slur, it is a purposeful racial slur. The application of that slur to non-whites and clearly non-KKK's reveals its purpose as a slur. Association with all the negative of a colour based group ensures it is a racialized epitaph.

White Supremacy, when applied to non-KKK folk is clearly as nasty a racial epitaph as any of the other vile race based slurs out there. Uni-dimensionality attempts to enable its application to anyone based on punch up rationales. If youtube and twitter want to censor racial hate, they should consider censoring the pejorative use "white supremacist", "Nazi" and other such slurs.