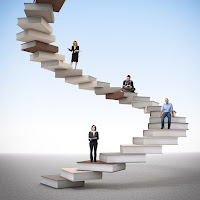 There are a couple of trains of thought with regard to teacher professional development.  I'm going to focus on two standards-based approaches. The intent is to deconstruct the assumptions and feedback loops in these approaches.  In this post, I'll introduce some background and explore the increasing-standards train of thought.

On a loose-tight managerial spectrum, there are a couple of paths standards based professional development can go:


Like any categorization, this one is obviously arbitrary (heck, it doesn't even have an ANOVA table to give it that false air of social-scientific authority!). However, as I've discussed before, education is a complex system that tends to operate between strange attractors.  From an organizational lens, these attractors are:
The middle is complex.  Emergent patterns ebb and flow with perennial actor changes and societal feedback.  While some steady states in the middle may be stable on moderate time frames, brevity requires omitting this discussion....

Some people try to sell this as "life-long learning".  If you don't see the linguistical con here, I've got some beachfront property in Nebraska to sell you...


Example
The Dufours have generated a good example of a fully developed "increasing standards" approach.

Dufour styled professional learning communities (PLC's) are based on a dogma of "increasing standards".  This is operationalized via inclusive ideological assumptions.  Inclusive educational ideologies posit "all students can learn".  This leads to the conclusion that achievement (the controllable aspect at least) is best framed as an exclusive function of teacher input.  Student capacity, freedom, and teacher inspired student transformations are exogenous.

PLC's unit of achievement is the number of students surpassing an arbitrary performance standard. In an ideal world standards are set by collaborative teacher groups.  In the real world, standards are set by the state.  Exceptions occur when a PLC's results are far above expectation.  At this level of performance actors finally become autonomous - at least in theory.

In practice the educational sustainability literature suggests successive waves of administrator turn-over results in near stochastic certainty that autonomous PLC's will, over time, get called out for being different or for rejecting the newest mandated reform.  Autonomy has bounds and educational success can't escape the politics of shifting values.  As many a tightly coupled school division would say, you are always free to do whatever is reasonable -as long as it agrees with what we're asking.  Like any utopian solution, fidelity is paramount.


Philosophy
Philosophical assumptions of increasing standards are humanistic toward students (in a PLC model) and machine oriented toward teachers.  In education's highly nested organizational hierarchy, this produces a system which, on a whole, has an uncertain philosophical orientation.  Tension between humanistic assumptions for teacher-student interactions but mechanistic assumptions for teacher-leader interactions suggest organizational actors may complexly oscillate between the polarized dogmas of loose-coupled humanism and tightly-coupled machination.

Increasing standards can of course be applied both to teacher and students.  KIPP schools are an excellent example of this.  In this case, philosophical assumptions are entirely machine oriented and all actors in the system (except for elite decision makers) are cogs in a machine.

Humanist approaches can also be applied to both teachers and students.  In this sense, an increasing standards approach may mirror a structural-marxist philosophy (caveat emptor - I know bunk about marxism....): revolution is constant, the bottom matters most, equality is utopian, and self-sacrifice is essential.

In a simpler sense, the focus on those who don't succeed represents the gist of modern feminism and social justice.  While it may seem odd to associate "leftist" philosophies/ideologies with a business oriented approach, tolitalitarianism makes strange bedfellows....


Focus
It's easy to deduce that the focus of the ever increasing standards approach is students/teachers who do not meet standards.  This provides an obvious resonance with inclusion which takes for granted that system improvement comes from focussing on the bottom.

The contribution of heroic actors (who typically grate against tight-coupling's contextual blindness) is offset by net improvements.  Losses at the top of the pyramid are more than offset by gains at the bottom.  (For what looks to be a reasonable discussion on inclusion, see Rethinking Inclusive Education: The Philosophers of Difference in Practice.)

In terms of students this means 20% grade point improvements for F students more than make up 2% losses for A students. In terms of teachers, this means improving poor practitioners' teaching capacity yields better net results than continued empowerment of heroic actors.  The business label is apropos.

History shows multiple cases where this trade-off has been successful.  The most obvious case is conflict between large farming societies and small hunter-gather societies.  Farmers tend to be less proficient warriors than hunters.  But sheer numbers dominate in the long run.  The US civil war is just one among hundreds of examples.  A multi-level selection theory (or any strain of group selection) is informative here.

Increasing-standards is somewhat dissonant with:

The ever-increasing standards approach must eventually eat-its-own.  Exponential achievement increase is a logical phallacy (pun intended).  At some point, things have to level off.  What do you do then?

In practice, PLC's & increasing-standards approaches reach the point where incremental improvements on the same old questions sap more and more human capital and motivation.  Even perpetually worthwhile goals like "student achievement" or "lifelong learning" are sensitive to synergistic demands. Growth and change are fundamental aspects of human group behaviour.  They aren't mere add-ons.  Machine philosophies neglect this at their own peril.

Luckily, education always has new problems to tackle. But, as mentioned before, are those new problems allowable? Are they mandated & non-constructive?  Or do inevitable system level directional changes provide a perpetual source of refocus and thus a continual option for synergy?

Perhaps.  But the answer is largely determined by the system in which any single school division resides.  Education's strong moral mission creates strong background pressure for complete system alignment, not to specific practices but to general morality.  See List & Pettit's work on judgement aggregation theory for a fairly rigorous modelling of why this is the case.