Why the "quasi-sacred" part of this blog?

Here's an old post from about 10 years ago.  My thinking has obviously matured since then, but I think it still captures why biological approaches to the science of religion inform educational change questions so neatly.

The post is based on D.S. Wilson's excellent book "Darwin's Cathedral".  At the time, it was an excellent and refreshing escape from the sloppy evangelical approach of the New Atheists (who at that time had reached peak popularity). 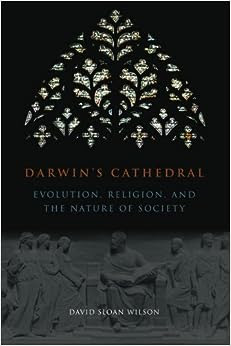 One of the challenges with educational change is the resiliency of old beliefs.  Many change theories propose ways through the walls of stakeholder resistance. Some are idealistic in nature, relying on full transformation and  universal adoption.  Others rely on slippery slope adoption in what amounts to hidden coercion.  The fundamental nature of each change initiative really gets revealed in the way it expects to change the masses.  The high intrinsic motivation of formal educators means there are always a few experimentally minded groups that can be located to make change initiatives initially successful.  However scaling is the true crux of educational change.  Wilson’s ideas in Darwin’s Cathedral yield a new perspective to some of the quandaries and circular problems of educational change.

Formal education is a highly moralistic endeavor.  Education maintains many of the deeply shared common values of society.  Formal education and its hidden curriculums (unstated expectations) provide a grammar that is useful for maintaining cohesion, or at least intelligible cultural communication, in diversified societies.  Now, by this I don’t mean the specific knowledge and language: rather, I mean implicitly understood assumptions of the way society works.  Specifically, I refer to the fuzzily understood morals and ethics around which society and its groups are expected to operate.

In this light, Wilson’s multi-level (group) selection approach to religion is very insightful.  Education’s central position as a cultural pillar has grown to be protected by very robust defense mechanisms.  The adaptive function of religious tendencies should enable group dynamic theories to leverage, rather than blindly fight, evolutionary predispositions.

Wilson shows that religious tendencies are adaptive solutions to group level dynamics.  He also shows that the free-rider problem of group selection is solved through morally enforced norms which are well controlled by specific religious characteristics.  People a normally distributed range of genetically evolved predispositions that work to counter balance free-riding.  In terms of the quasi-religious role of educational systems, this means that educational change may have to fight innate tendencies that protect moral understandings.  Change dynamics may be hindered by our own tacit reluctance to change the foundational understandings upon which the larger groups involved in education operate.  Thus while change initiatives may be fully rationale, they may not be adaptive.

Several implications emerge from this shift of perspective.

1.     Educational change theorists may benefit from looking at how large scale religions adapt, evolve and change.
2.     Re-interpretation rather than reform may be appropriate for some levels of change.  Factioning and full schisms may be the only solutions for other levels of change.
3.     For changes to be successful they may need to show solutions to the free-rider problem (in education this is probably participating in the process without ever getting “educated” – at least in the right way)
4.     There needs to be a balance between factual and practical realism.  As Wilson (2002, pp. 228) states, “If there is a trade-off between the two forms of realism, such that our beliefs can become more adaptive only by becoming factually less true, then factual realism will be the loser every time.  To paraphrase evolutionary psychologists, factual realists detached from practical reality were not among our ancestors.”  And just so this doesn’t sound as if I, or he is advocating flying spaghetti monsters, “the proper and intellectually respectful way to approach factual and practical realism is as a trade-off… However, it appears that factual knowledge is not always sufficient by itself to motivate adaptive behavior.  At times a symbolic belief system that departs from factual reality fares better.  In addition the effectiveness of some symbolic systems evidently requires believing that they are factually correct.” (Wilson, 2008, pp. 229).